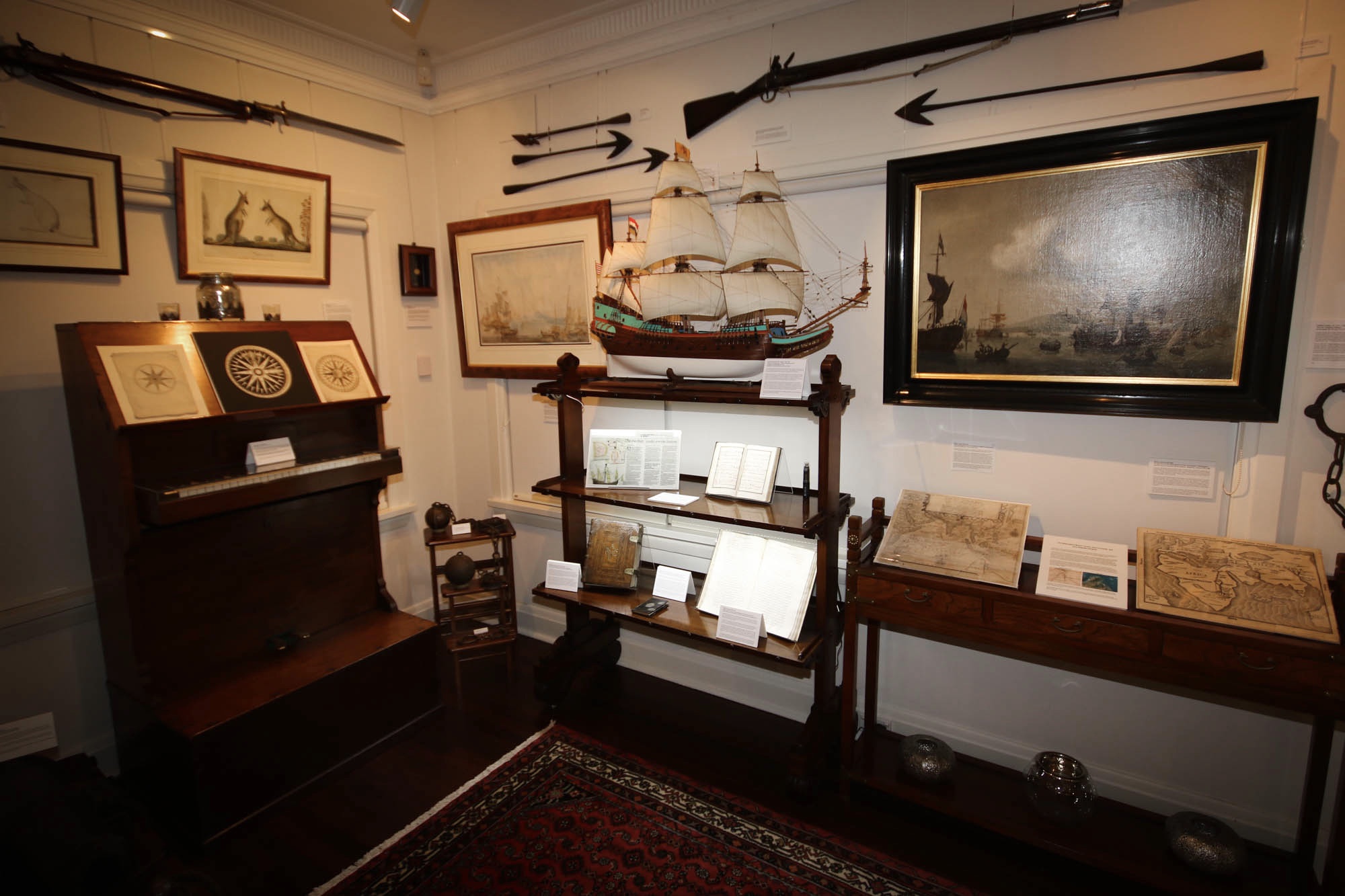 After two previous attempts to plan a tour by the NSW Branch and being stymied by COVID and lockdowns thirty-four excited members gathered on the 18th March at Rothwell Lodge in Glebe, the home of Robert Hannan and Peter Crawshaw (illustrated below) for drinks and canapes to begin their four-day tour. Our President and members from NSW, Queensland, Victoria and Tasmania renewed old friendships and expressed their eagerness to be out and about with a special focus on Australiana and early colonial architecture. 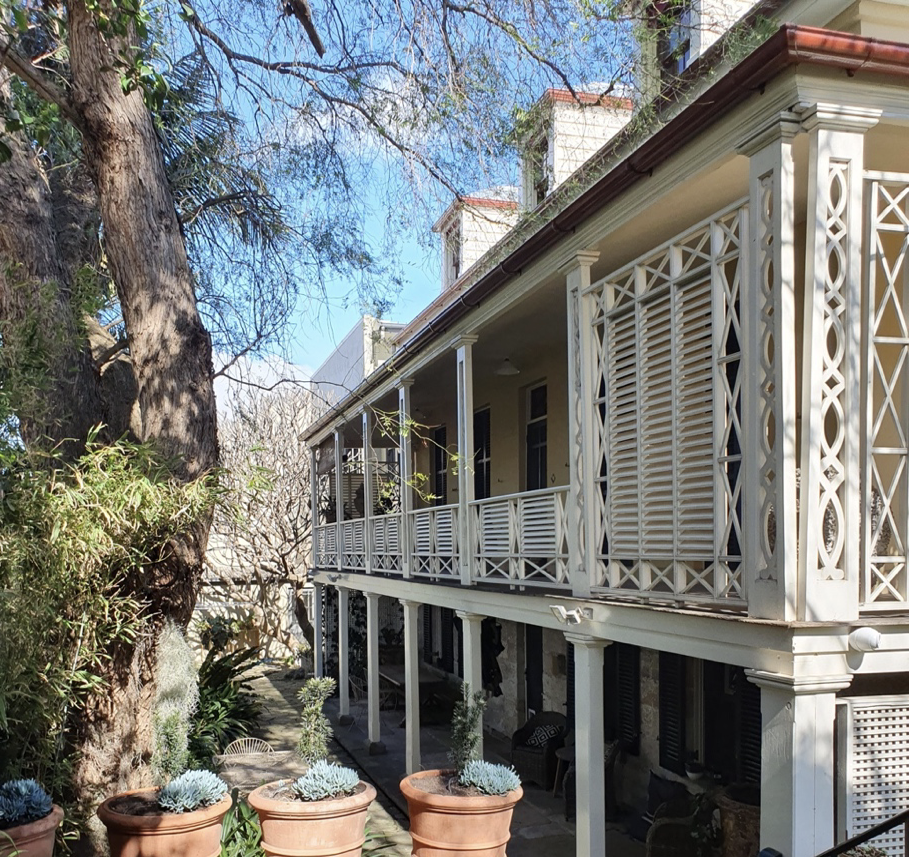 Although extremely wet our first morning started with a bus pick up at Central Station. We set off to our first stop, the home of two members north of Wollongong. Their forty-year collection included early NSW and Tasmanian furniture, ceramics and a fine collection of art spanning a hundred years from the early 1800s. Members could be seen closely inspecting items and adding their opinions to origin as well as learning much from the knowledgeable owners.

During the bus trip back to the city the weather fined up and remained dry for the rest of the tour. We lunched at the historic Coal Loader on Sydney Harbour at Waverton before heading off further north to see an extensive private collection with its emphasis on Australian marine history and the early days of the colony until 1840 (illustrated below). The collection forms part of the Silent World Foundation and the group was engrossed in its well-curated and displayed items. Members were impressed by the quality and significance of this historical collection and the generosity of the host in sharing his knowledge.

On Sunday morning we visited two impressively restored early Georgian houses in Dawes Point (illustrated below). Both had undergone extensive restoration and now include contemporary fixtures and adaptations to combine the best of colonial living with modern conveniences. The generous hosts told their stories and some fine colonial furniture was on display. By serendipity the owners of another colonial double fronted house kindly opened their home and members were able to see restoration work in progress and understand the extent to which a major restoration absorbs many years of dedicated owners’ lives.

The group then went onto the Australian Club (est.1838) in Macquarie St (illustrated below) where we were generously hosted by club members and able to see their large Australian 19th and 20th centuries art collection including sculpture and First Nation’s art. We also viewed a cedar Stuart and Son piano and heard its extensive range played. This was a rare chance to chance to view this private collection and we are indebted to the Club for hosting us.

This busy day continued with another trip across the harbour to see a unique collection of decorative arts and furniture much in the arts and crafts style collected by two members over many years. The generous hosts and their son spoke about their pieces and we all left thinking there was new level of “house full” to which we as collectors could aspire!

The day finished at Sails restaurant in Lavender Bay with its wonderful view of the Harbour Bridge and by chance the bridge’s 90th birthday (illustrated below). Delicious food was served but the highlight of the night was the Kevin Fahey lecture delivered by Bob Fredman. His narrative supplemented by excellent audio visuals gave a depth to understanding of one collector’s research and decisions about how to conserve and present an early colonial Tasmanian sofa (illustrated below)

Tired but not yet replete we left early on Monday morning to travel to Camden Park at Menangle, the home of John and Edwina Macarthur Stanham (illustrated below). Built by John and Elizabeth Macarthur in (1832), leading pioneers in the establishment of the Australian merino wool industry and designed by John Verge the house has been continuously occupied by descendants. We were taken on a tour of the principal rooms which retain their original ambience, cedar woodwork and furniture still in original positions. In a hallway there was an interesting display of southern NSW timber samples collected by Sir William Macarthur who was assisted by an Aboriginal elder in supplying the indigenous names still written on the back of the samples. Both owners are passionately dedicated to Camden Park’s preservation and future.

After a tasty lunch eaten in the garden outside the house, we were taken on a tour of the large-scale gardens and outbuildings. The historic garden has been much improved in recent years with the assistance of volunteers. There are many old specimen plantings to marvel at such as the Waratah Camelia, The Chilean Wine Palms, Queensland Bottle Trees and Hooker Bauhinia grown from seeds collected by Ludwig Leichhardt.

In the afternoon we travelled on to Mulgoa where we were met and shown around The Cottage, the original cottage of the Cox family (<strong>illustrated below</strong>). James Broadbent its owner, lives in almost 19th century style and the c.1810 timber bungalow with verandah and retained views certainly creates a special atmosphere. There was much discussion and interest in a very early Cox family table that could well have hosted Governor Macquarie to dinner.  James and other Mulgoa Valley residents are committed to retention of the Mulgoa Valley as an area of heritage protection for both the built and historic landscape.

On the last day and wondering if we still had any energy left, the group arrived at Old Government House, Parramatta. (illustrated below) Ian Stephenson who was on the tour gave the background to the building stages of the house. Our main purpose was to see a new exhibition called Making Good: Convict Artists in Exile. On display are examples of utilitarian and decorative items made by convicts in the colony. Curator Anna Ridley gave us the context of the items chosen.

We also explored the ground floor rooms and were able closely examine early furniture. Some conjecture was heard between group members about timbers and later changes to some pieces.

We then went onto the Power House Museum in Ultimo to see two current exhibitions one being the Eucalyptus Dom celebrating the predominance of the eucalyptus species in Australia and Clay Dynasty, an exhibition of the development of Australian ceramics and pottery since 1945.

Our penultimate visit was to two member’s home in Petersham where we were given a tour of an extensive collection of early cedar, Jarrah, Blackbutt, Huon furniture, boxes and some decorative arts all displayed in an appealing way for day to day living.

Our final stop and dinner was to nearby Stanmore where we were hosted by Andy Simpson and Margot Riley (illustrated below). A fabulous dinner had been arranged and we were able to see a most remarkable collection of furniture and decorative arts throughout the night as we wandered between house and garden. During the dinner thanks and appreciation to organisers Robert Hannan, Andy Simpson, Tim Cha and me were conveyed by our president Colin Thomas. Detailed planning ensured smooth running and successful arrangements during a period of great uncertainty and changing public health rules. 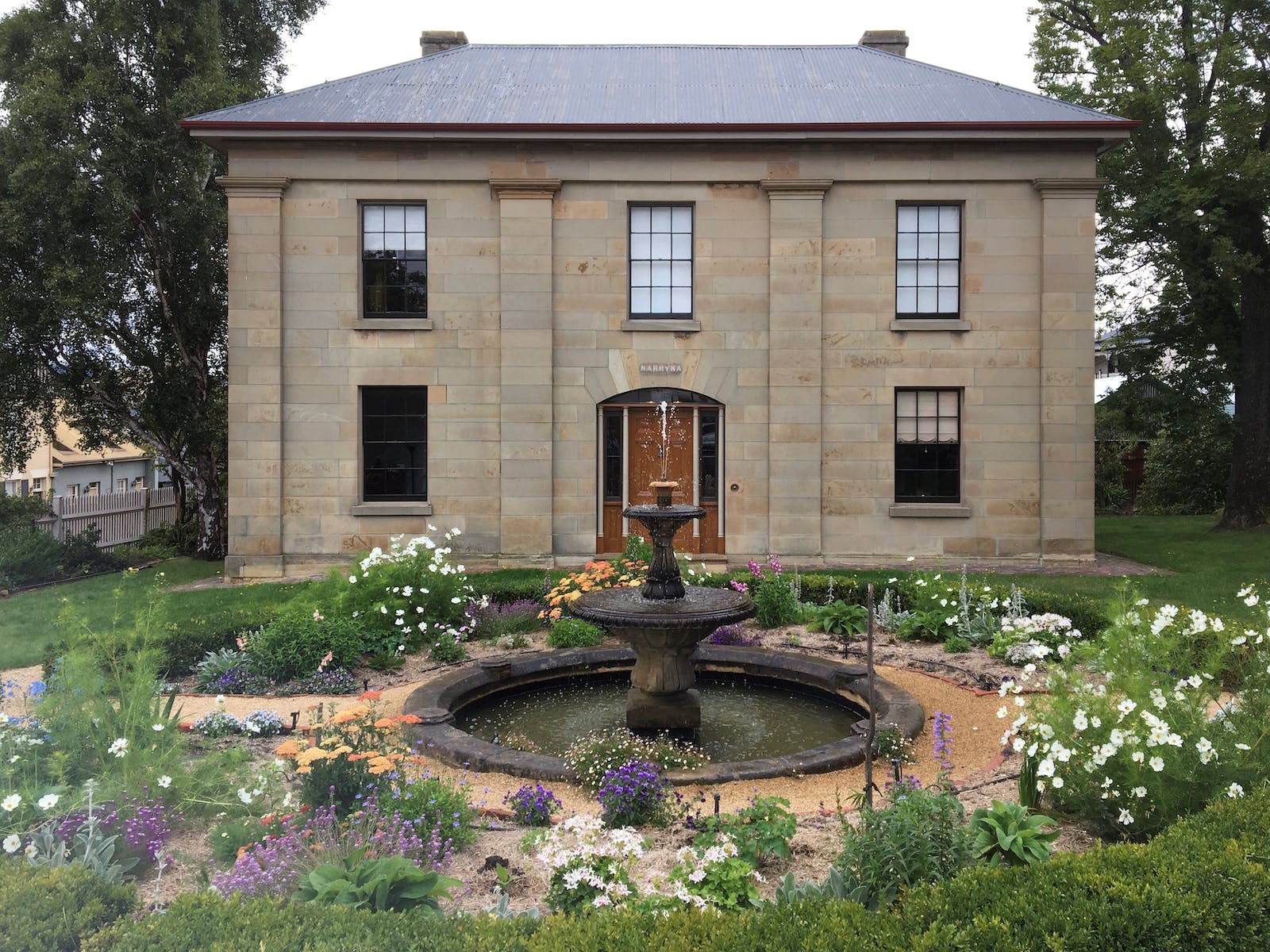